Thanks to the timely utilization of advanced technology and modern marketing approach, “Lifebuoy - Infection Alert System” not only won big in matters of sales value but above all has put forward the advent of a truly useful tool for the public, which in turn strengthens its consistent brand proposition of protecting consumers’ health - a promise it has kept dedicatedly over the past 110 years.

The typical tropical climate of Vietnam has long been a boon for many infectious diseases to recur year after year, which puts the well-being of many infants and young children in jeopardy, even when most of the diseases mentioned are preventable. That being said, it’s not until the presence of a large outbreak that information about the disease is widely circulated, making it arduous for any preventive method to get undergone. Therefore, wouldn’t it be better off if warnings about a looming disease are early informed so the masses can adopt proper preventive actions, such as washing their hands with soaps regularly?

By viewing the prevention process as not being merely held accountable by the public health center, an FMCG (Fast-moving consumer goods) company has adopted this initiative as a chance to contribute to society, increasing brand awareness, and of course, improving sales performance. That’s how Lifebuoy took advantage of this scenario.

Influenza affects about 1.8 million people each year in Vietnam, not to mention the unrecognized and unregistered cases. Other seasonal illnesses are also likely to flare up in recent years, such as H1N1, hand-foot-and-mouth disease, or dengue fever. Based on data and statistics of the current situation, Lifebuoy’s team began to analyze as to why this is the case.

Their findings soon shed light on the predicament as they discovered 2 reasons. Firstly, as mentioned, the news only started to circulate when the disease had already broken out and the risk of contracting the disease at a warning level. Secondly, Vietnamese moms still adopted a habit of taking their children for treatment after the contagion rather than taking preventive actions. Therefore, there posed a need for disease caution in a timely manner to reduce the level of susceptibility.

Aware of its position as a leading hygiene brand in Vietnam, Lifebuoy decided to continue to promote its mission to help mothers "stay one step ahead of infection" by reminding them of the simplest yet effective way to prevent diseases: Carefully wash your hands with soap. But in what way could we give them caution most accurately, effectively, and in real-time? 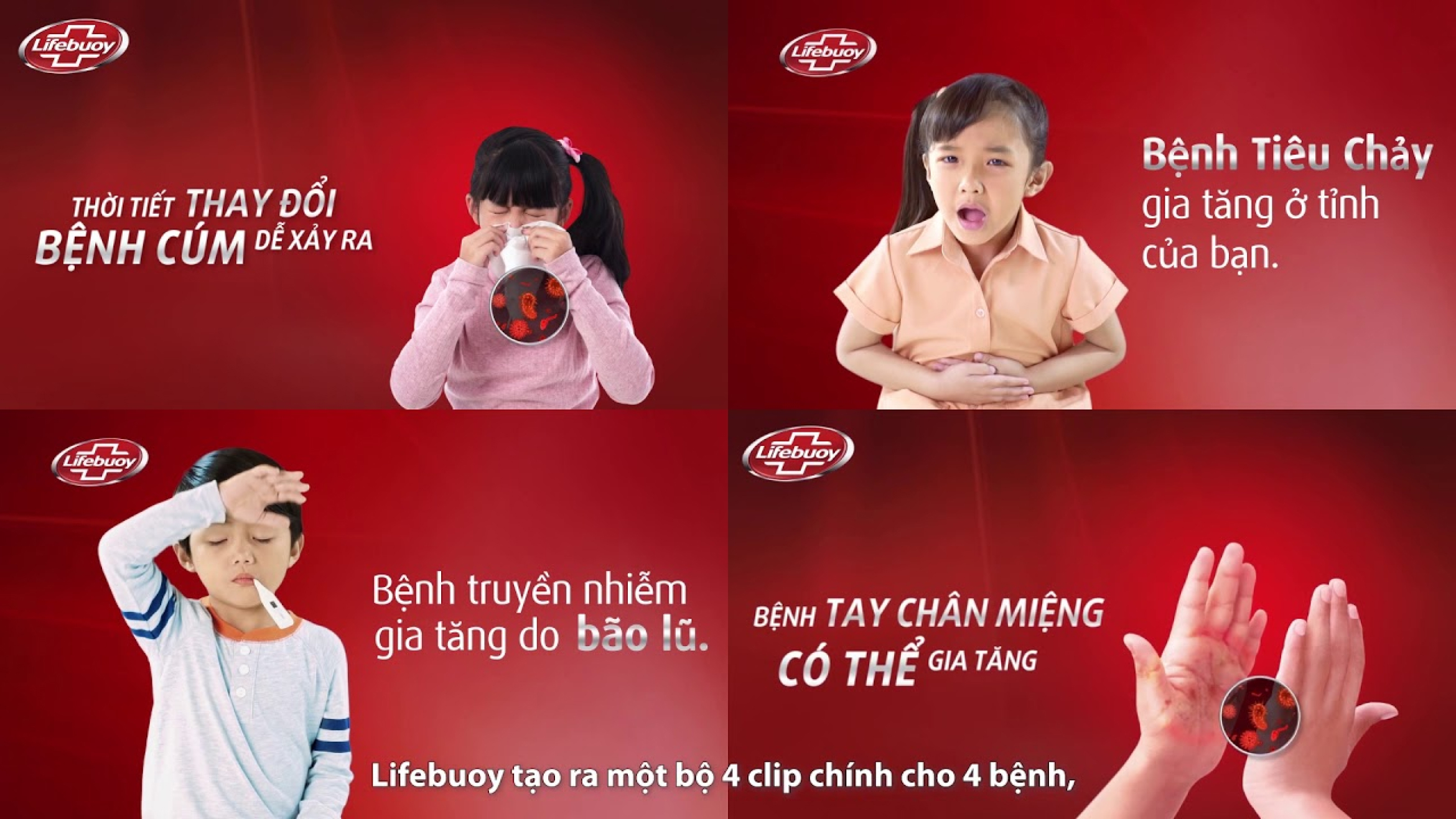 Exploit the use of technology

“Lifebuoy - Infection Alert System” Campaign is phased into three fundamental stages, each stage’s primary resource is the advancement of technology.

The first step is to determine where and when the disease is at risk of becoming a plague. The brand acknowledged that as the number of searches on Google for the flu treatment increased, the number of actual cases also increased. This correlation is consistently demonstrated in data collected over the course of eight years.

Every day, the system consolidates real-time data from OpenWeatherMap and Google search trends to make real-time disease predictions with the same accuracy of weather forecasts. It allows Lifebuoy to monitor the probability of a disease outbreak and make sense of its locale in Vietnam in a real-time manner.

Now, with innovative data-driven marketing thinking that has never been seen in the market before, Lifebuoy has solved half of the seemingly impossible problems. The other half is to figure out how consumers get hold of this information.

That’s exactly the second step of the campaign. The campaign would be susceptible to errors, inefficacy, and unpunctuality if the forecast were transferred manually to household women from differing localities. Not to mention the fact that some locales might have a higher risk of an outbreak, while the others have none. That’s why Lifebuoy has used Ruled By Weather tool to activate online ads automatically, with frequency and visibility customized to each area according to susceptibility level drawn from the forecast.

For example, when influenza is identified as a high risk in Hanoi and Vinh Phuc, and hand-foot-and-mouth disease in Dong Nai, parents in these regions will receive different messages. Mothers in Hanoi will see the version: "Flu in Hanoi, please pay attention!", while family women in Vinh Phuc will be approached with the phrase: "Flu in Vinh Phuc, please be aware!". Respectively, Dong Nai parents might expect to see: "Hand-Feet-Mouth in Dong Nai, pay attention!".

Prior to running the ads, in order for each mother in each locality to see the message content strategically designed for her area and not others, Lifebuoy has built 4 master creative videos with two customizable information categories, those are types of diseases (four in total) and locations (64 provinces). These media campaigns will be automatically “turned” on-off based on local correlation analysis retrieved from Google.

However, giving accurate disease cautions for the right people, in the right place is simply not enough for LifeBuoy’s ambitious plan. They proceed one step further to work in tandem with hellobacsi.com to set up a news portal dedicated to updating necessary knowledge about the diseases and advice of medical workers for prevention and treatment.

Hellobacsi.com is a trusted platform specialized in dispersing healthcare information whose contents and operations and are written and run directly by experienced doctors and medical workers. The site has a positive organic reach level, plus a substantial repertoire of information about a wide range of diseases, which has helped many family women to update their knowledge and enable them to serve as a sort of backbone for their families’ health in various ways.

And the fruitful accomplishments

Known for an avant-garde approach and the ability to dig deep and apply modern technology with unprecedented innovation, the talented marketing team of Lifebuoy has pulled off a resounding success with the birth of “Infection Alert System” campaign.

In 2019, there was an average of 3.5 million local mothers receive an early warning from the brand monthly. Sales increased significantly in most areas. For instance, Hanoi had recorded an 18% increase in sales revenue during the influenza outbreak, Dong Nai registered a 29 percent incremental revenue, thereby boosting Lifebuoy’s growth rate to as much as 20% compared to the same period last year. Lifebuoy's market penetration index in urban areas increased by 100 points and in rural areas by 500 points.

What’s more special, the campaign has been nominated as “Best In Show” - an industry award of Smarties Vietnam 2019 organized by the Mobile Marketing Association (MMA). The campaign also went further to acquire the "Innovation" and "Location-based services/targeting" Gold awards, both of which are important award categories that emphasize the digital transformation of an FMCG brand that has long been familiar to Vietnamese consumers.